From the desk of the Chief Economist

April 1, 2016 - The global economy slowed in recent years and is in the longest stretch of sub-par growth of the last three decades. This is partly due to the sudden drop in oil prices and other commodities–which have not contributed as much as expected to global growth. China is also weighing on global growth as it transitions to an economy based on consumer spending rather than investments.

Much of the global economy is linked to China, creating a ripple effect throughout the rest of the world when it stumbles. Just a decade ago, emerging markets like China, Brazil and Russia drove global growth. Today, the advanced markets are taking the lead. Turmoil in global financial markets makes it more challenging to sustain the global economy, leading to uncertainty about future consumer and business investments and spending. Despite this confusion, the state of the global economy should improve in coming years, with the U.S. at the forefront.

The prospects for U.S. expansion are good, despite persistent speculation of an impending recession. The last recession ended more than six years ago, and the U.S. economy has been growing ever since–the fourth longest expansion since 1945. U.S. real gross domestic product (GDP) is expected to grow 2.3 percent in 2016 and 2.8 percent in 20171. This is not the stellar growth of the 1990s and 2000s, but compared to other advanced economies, the U.S. economy continues to perform well. 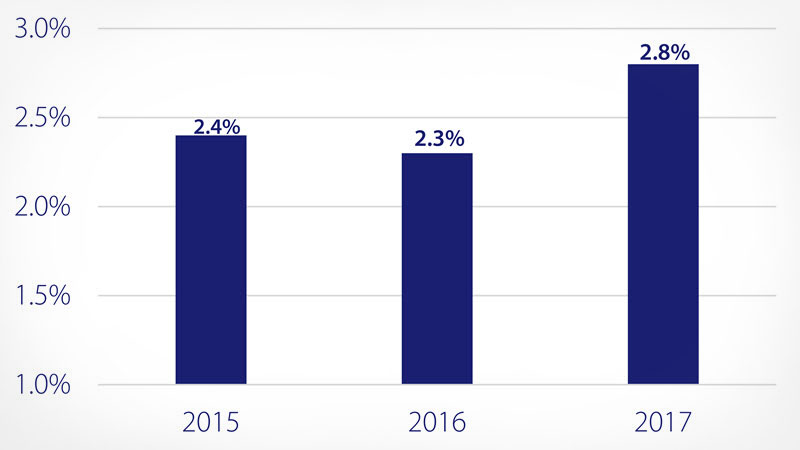 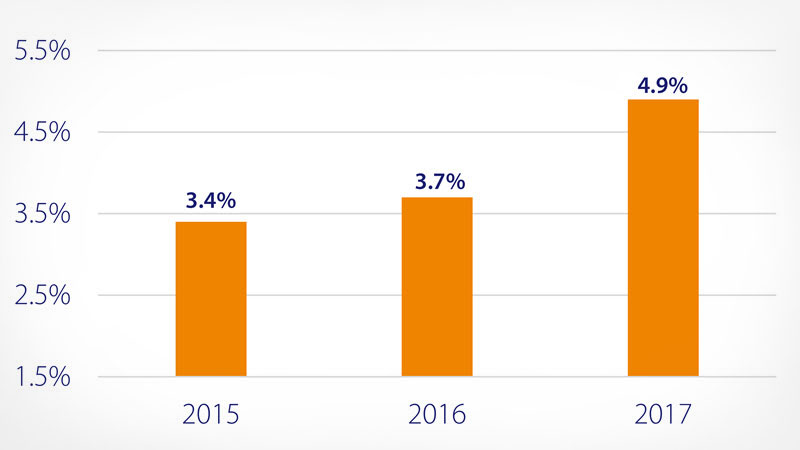 The Fed is expected to raise rates twice this year (25 basis points each). The hikes aren’t likely before mid-year, although the exact timing remains uncertain and any moves will depend on economic conditions.

Another solid year of job creation is expected, with estimates of an average 200,000 jobs created per month throughout 2016. Although January was unexpectedly weak, likely due to seasonal factors, February came back above expectations with 242,000 jobs–further indication that the U.S. labor market remains strong. The U.S. should reach full employment–defined as the headline unemployment rate of 4.5-4.7 percent–by late summer. The improved employment situation should increase aggregate income and wages, translating nicely to aggregate spending growth. 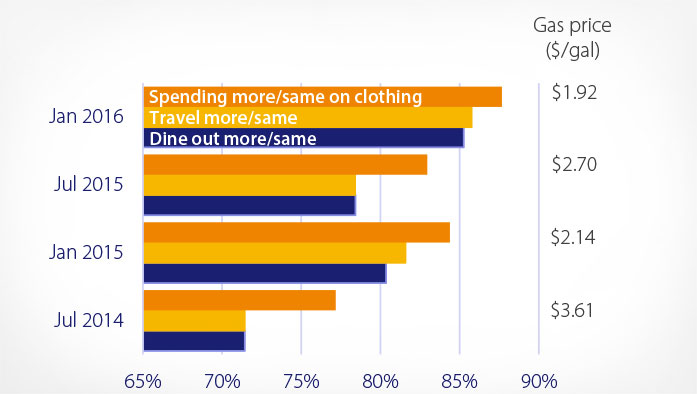 Throughout 2015, consumers enjoyed an average savings of $750 on gas per U.S. household and were expected to increase spending with their windfall. Historically, every dip in gas prices over the past 30 years directly resulted in a lagged increase in non-gas spending. In fact, a recent consumer survey2 indicated that a majority of consumers reported spending more or the same amount on discretionary purchases like vacation, dining out and clothing due to lower gas prices.

So far in 2016, however, the savings rate remains strong (even increasing)–suggesting that consumers are saving more of the gas windfall. Wealthy Americans (+$100,000 annual income) in particular are saving the most, while other income groups do not have the same propensity to save the gas windfall. As such, these consumers may be more likely to spend their gas savings as prices stay low for a sustained amount of time and consumers continue to expect price stability.

Housing wealth is no longer the key driver of spending that it once was before the recession, according to recent research on the "wealth effect" from Moody's Analytics3. Prior to 2008, a $1 increase in housing wealth had a larger impact on retail sales than a $1 increase in stock wealth had–adding 8 cents and 3 cents respectively to sales. In the post-recession period, however, the wealth effect has both decreased and tilted in favor of stock wealth. Housing now adds only 4 cents to sales, compared to 12 cents from stock wealth.

The shifting wealth effect has several implications. First, any prolonged stock market downturn will have a negative effect on consumer spending, particularly among the affluent. Second, despite strong housing price increases, the overall effect on consumer spending is minimal. Most middle class wealth is in housing, which is no longer a reliable source to boost spending. Instead, spending will have to come from aggregate wage increases as more middle class consumers are employed and feel confident that they will stay employed. 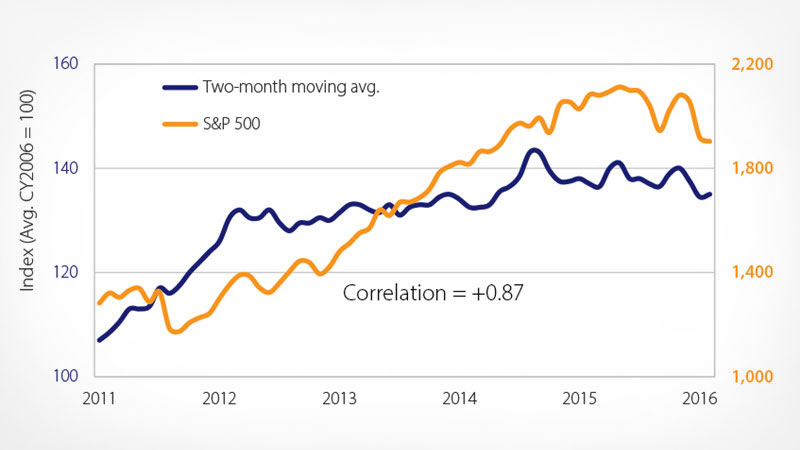 *Index of spending at stores frequently patronized by consumers with high levels of credit usage. The correlation coefficient listed is calculated from 2007 through the present.

The Visa Luxury Spending Index shows a strong correlation between the S&P 500 and spending at luxury stores, where affluent consumers are the primary customer. However, over the past 18 months, luxury spending has declined more than the equity markets would suggest. The index includes spending from overseas visitors to the U.S. and the strong U.S. dollar makes such purchases more expensive, weighing on the index.

North America (Non-U.S.): Canada is expected to recover from a slow growth period last year fueled largely by declining oil prices. Real GDP growth should dip to 0.9 percent in 2016 (from 1.2 percent in 2015), but should strengthen again to 2.0 percent growth in 2017. Mexico’s economy is expected to accelerate from 2.5 percent in 2015 to 2.7 percent in 2016 as consumer spending continues to increase. Reforms enacted by the current government are also beginning to bear fruit, especially in the tele-communications sector, which catapulted Mexico to rank fourth in the world last year in the affordability of mobile telephony, up from 93rd in 2013. The reduced cost of mobile technology opens a new era in digital banking opportunities in Mexico.

Europe: Strengthening consumer confidence and steady job gains should support further increases in household spending in Europe, helping to offset weakness from slowing world trade. In December, the Eurozone unemployment rate fell to 10.4 percent, its lowest level since September 2011. Business surveys suggest that these gains should continue through the near future. The consumer spending picture is more mixed in the U.K., especially among lower-income households, since a cut in welfare benefits tempers income gains from the new living wage. 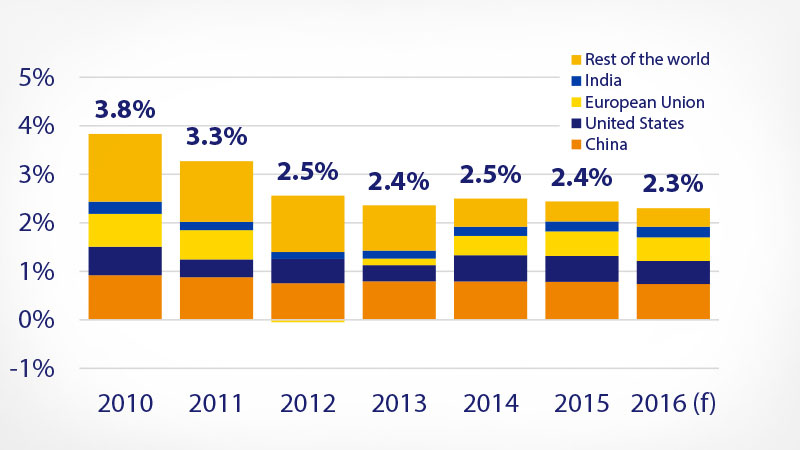 East Asia: Even as China's real GDP growth slows to an expected 6.2 percent in 2016, China will still account for more than a quarter of all global growth this year. The key question for China and the world is whether its inevitable slowdown will continue to proceed at the current measured pace, especially as it rebalances away from investment and exports to a more consumer-centric economy.

The record high build-up in non-public debt places additional stress on an already challenging process. Nevertheless, the process seems to be well underway, with retail sales still expanding at a double-digit pace and Chinese tourists traveling overseas in record numbers.

Emerging markets: Low commodity prices should continue to weigh on much of the emerging world, impacting export earnings, investment flows and ultimately income growth. Although falling oil prices are ordinarily believed to be a net positive for the global economy, the scale of the decline is posing significant challenges to major energy exporters such as Brazil, Russia, Saudi Arabia and Venezuela, which combined are expected to shave 21 basis points off global growth; prior to 2014, these economies typically contributed 25 basis points to growth.

Risks to the global economic outlook

A substantial share of China’s businesses and factories are struggling with overcapacity and high levels of debt. If they were to default, the resulting financial crisis could cut the expected growth rate in 2017 by at least half and cause spillover effects to neighboring countries and the broader emerging world. Some risks already exist, but the full impact has yet to be measured. Continued strength in the dollar could exacerbate capital outflows from the emerging economies, already weakened by reduced inflow of export revenues and foreign investments. In Europe, the migration crisis is causing a breakdown in the common border area, with corresponding disruption in cross-border supply chains and commerce.

Risks are also emerging in the U.S. Declining stock prices could weigh on spending through negative wealth, especially among the affluent, who represent about 40 percent of spending in the U.S. The strong dollar will continue to weigh on exports and corporate earnings. In addition, if oil prices do not stabilize, we can expect further declines in energy investment and more bond defaults, which will have a deeper impact in the U.S. oil belt. Despite these risks, the outlook remains guardedly optimistic that the weakened global economy will be on a higher growth path soon. In the meantime, the U.S. is well positioned to withstand the turmoil and continue in its role as one of the primary leaders of worldwide growth. 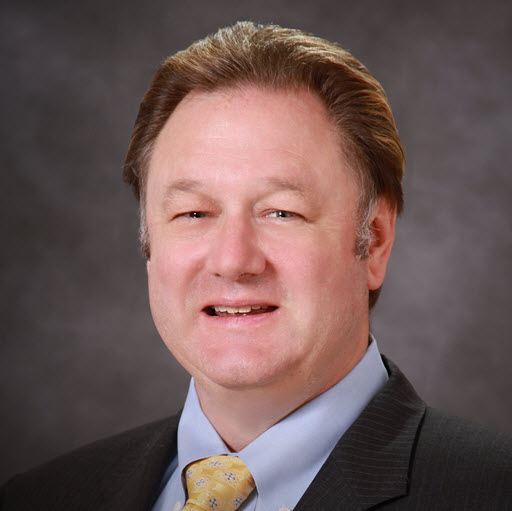 Wayne Best leads Visa’s Business and Economic Insight team. As chief economist, he keeps close watch on emerging opportunities in the trillion-dollar payments industry. An active participant in the World Economic Forum's Global Strategic Foresight Community, he identifies economic trends shaping the future. Best's presentations and reports explain the impact of these trends to company and client executives, as well as government leaders around the globe. Before joining Visa in 1990, Best worked as a consultant performing cost benefit analyses for the power industry. In addition to an MBA, Wayne holds a degree in nuclear engineering and has participated in the Stanford University and Kellogg School of Management executive programs. 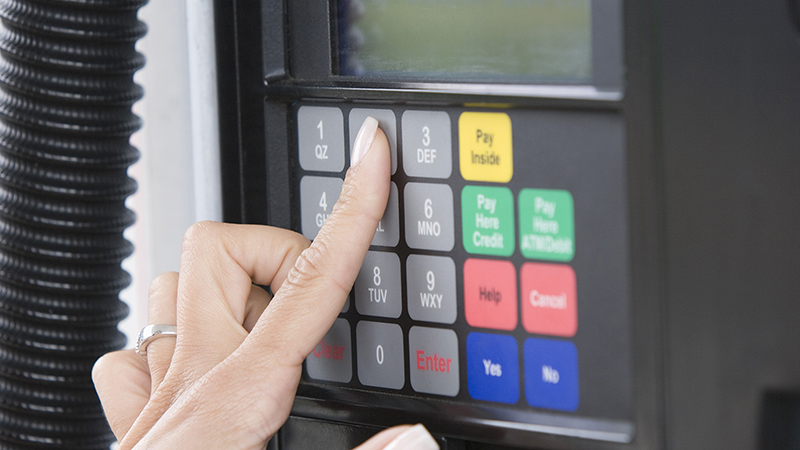 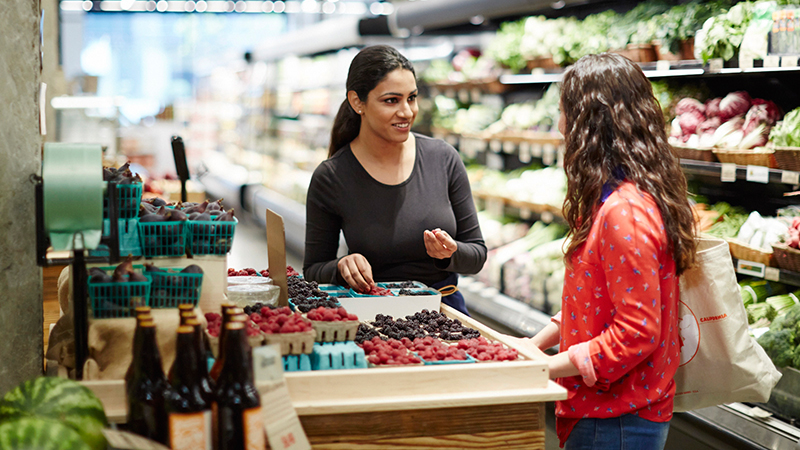 Learn about spending trends from April 2015.