Looking back, most economists were overly pessimistic. Close reading of high-frequency transaction data has revealed greater resilience in the global economy.

As promising as that sounds, could the global economy beat those forecasts? Looking back, most economists were overly pessimistic: the downturn after the lockdowns was milder than expected and growth in the following quarter was stronger. Our team of economists was not as surprised because close reading of high-frequency transaction data revealed greater resilience in the economy. Currently, the data point to three potential surprises that could cause growth in the near term to outperform again in 2021.

Mass vaccinations could reduce the potential risks of consumption in categories involving greater social interaction, such as travel and entertainment. That could induce more affluent households to re-engage in this hard-hit sector. Once the lock-downs were lifted, middle- to lower-income households responded more readily to the discounting in travel globally. These households began to close the gap that formed earlier this year, until the coronavirus started to surge again in the fall. Affluent households’ travel and entertainment purchases, in contrast, remained much more depressed, even before the current contagion.

A line chart showing that YoY transaction growth of affluent households rebounded from a low of -19% in Apr-20 to -6% as of Dec-20 while non-affluent spending growth rose from a low of -12% in mid-April to 2% in October and leveling off at 0% in early December. 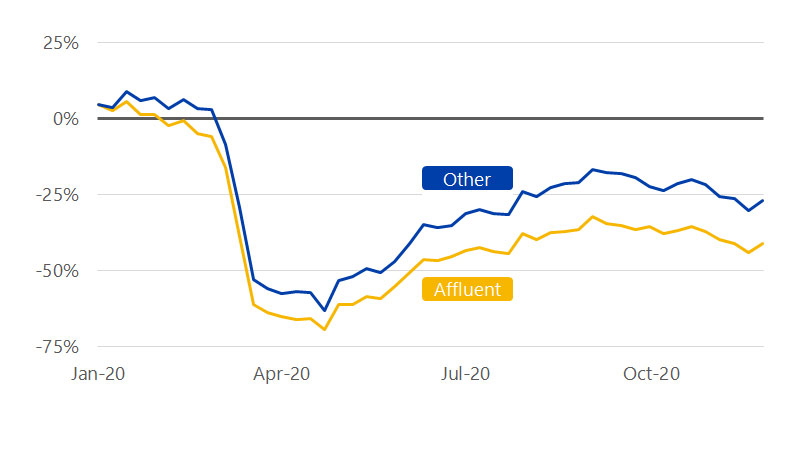 A line chart showing YoY transaction growth of entertainment and travel purchases by affluent households reaching a low of -69% on May 1 of 2020 and increasing to -41% in early December, while spending in non-affluent households rose from -63% to -27% during the same time period.

Surviving small and medium-sized businesses could fuel the recovery

Small and medium-sized businesses (SMB) have suffered the brunt of the economic costs from the pandemic. In November, for example, SMB domestic sales in retail and food services fell by double digits year-on-year across regions. Despite the losses, SMBs could again be the engines of the recovery, with new champions emerging from those that survived. When including only merchants that were open in both Nov-2020 and Nov-2019, same-store sales figures were much better across the board. The strong performance of stores that remained open suggests the survivors may be entering the new year with more resilience than generally believed.

Additionally, the disease’s resurgence over the last few months in regions such as North America and Europe has led to renewed SMB closures, either through new public health mandates or continued social distancing. Concerns that these restrictions will sink firms that survived the spring, however, appear misplaced. The severity of the restrictions on commerce has not been as extreme as it was in the spring, as shown by the number of firms that have remained open during the last months of the year. This gives hope that while significant pressures remain, businesses that have survived might continue to do so until widespread vaccinations provide the necessary protection for their customers and employees, and finally put an end to the crisis.

The pandemic and widespread teleworking precipitated an unprecedented exodus from large cities, raising fears that the population losses could accelerate a decline of large cities. These fears may be overblown given the small share of households that have left; moreover, those who left could help to speed the recovery if they return. From Rome to Toronto, around 2 percent of the consumers in central cities on average have migrated out in 2020, according to a comparison of anonymized active Visa cardholders in 30 countries. People who relocated have favored less densely populated suburbs like Chiba over Tokyo in Japan or coastal areas like Marseille over Lyon (inland) in France. Cities harder hit by the pandemic (Milan, Melbourne) have also seen the greatest out-migration.

As the recovery proceeds, those that left could help fuel a stronger recovery than the aggregate trends would suggest. One reason for the weak recovery in spending so far is that cardholders who moved had lower average spend relative to those who remained, most likely due to the lower cost of living in those outer areas. Those returning would reverse these trends, allowing spending to accelerate. Thus, over the medium term, an increase in growth in large cities—typically more productive, centers of innovation—could provide a bigger boost to the national economy than elsewhere.

The economic cost and hope for a better year ahead

Covering the pandemic and its economic impact has been a humbling experience this year. Assumptions often became obsolete as parameters shifted. Expectations of how the disease might progress were often confounded, as areas that were successful in the spring became overwhelmed in the fall. Looking back on the year, the damage from the pandemic is all too clear. With at least 1.8 million lives lost in one year, COVID-19 is on track to rank within the top 10 most deadly diseases over the last two millennia of human history in absolute terms. Even relative to population, it ranks within the top 30.2 While it will be some time before the full economic cost of the pandemic is known, prior pandemics suggest global incomes have fallen an estimated 1 percent based on the loss of life alone, while total costs due to pandemic-related disruptions could be as high as 3 percent of total global output.3,4 Beyond the figures, there are the families and communities disrupted, and the widening gap in opportunities. Nevertheless, as the new year gets underway, effective vaccines bring hope for a better year ahead.