September 22, 2021 – It is often said that “necessity is the mother of invention,” but the COVID pandemic may just be an exception to the rule. Rather than spurring new inventions, the sudden stop of the global economy, fueling a recession and bifurcated recovery, may have prompted faster adoption and more efficient use of existing technologies instead. To understand what happened, we used alternative data sources and took a deep dive into the App Economy to gain potentially useful foresight into the important determinants of the recovery— such as entrepreneurship, productivity, and creative destruction—that are often only evident with a lag.

Conventional economic theory and history tell us investment should have collapsed, and we should be dramatically less innovative and risk-averse at this stage of the recovery. It would also suggest that a sudden-stop shock of the magnitude of the COVID-19 pandemic should slow technology adoption through multiple channels.

In 2020, the sudden shock had a major negative effect on demand, plunging the world into a synchronized global recession that was the greatest drop in annual output in over a century. Falling demand reduces the return on investments, particularly those in new technologies as there are fewer customers to buy increased output. Second, the other major obstacle to investment—uncertainty—was dramatically higher. Investment in new technology is a sunk cost that is irreversible. With an opaque economic outlook, firms typically delay making investment decisions until there is more certainty.

Third, company revenues or cash flows were abruptly stopped by mobility restrictions and became less predictable with subsequent waves of the pandemic and subsequent lockdowns. This typically creates a liquidity constraint to further investment, particularly risky investment in new technologies. Finally, managerial decision-making quickly pivots to short-run, immediate issues such as lay-offs, liquidity and inventories rather than long-term strategic planning.

The response by both firms (many of which are merchants) and employees (typically consumers) broke all the traditional economic norms around technology adoption. Rapid investments embedded existing technologies more deeply into workplace culture and processes, and diffused them across the entire workforce. This continues to be one of the most idiosyncratic (and unpredictable) differentiators of the COVID recovery compared to other great shocks.

The historical norm for the previous three global recessions (1982, 1991, 2009)* was an average decline in global investment as a share of GDP of 0.5 percentage points. 2020 was different as investment globally rose by 0.2 percent of GDP. The contrast between the most recent recession and prior ones is even greater when considering what happened in the advanced economies, including key economies in North America, Western Europe and Northeast Asia, where the change in investment relative to GDP was -0.9 percentage points over the prior three recessions and +0.2 percentages points in 2020. Based on economic figures released to date and most forecasts, investment is set to rise in 2021 and 2022, with several countervailing forces at play. In 2020, firms, especially in the advanced economies, had to invest in technology to mitigate the disruption and allow business continuity. Working from home required firms to invest more in software platforms that facilitate virtual meetings and respond to the need for less physical or face-to-face interaction by further application of automation technologies. Creative responses are required to deal with reduced physical interactions with clients, in particular investing in intangibles such as marketing and advertising to retain brand loyalty. For consumer-facing firms, it has also meant adapting to a world where commerce increasingly occurs online in the digital space. 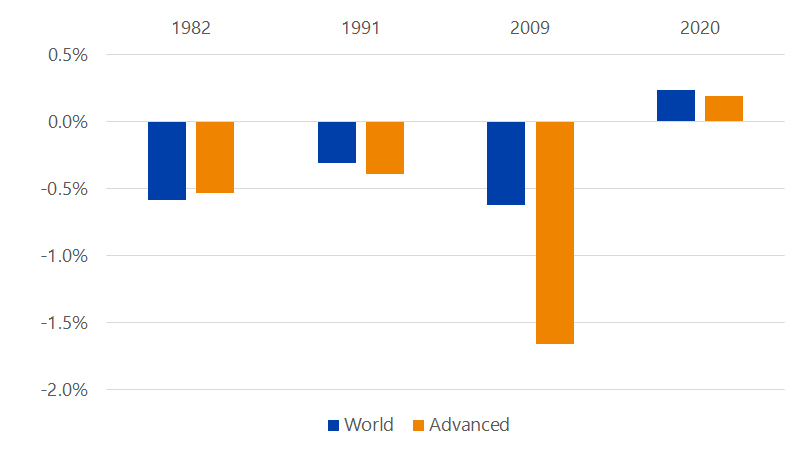