For most of the U.S. economy, times are good. | Visa

For most of the U.S. economy, times are good. However, the manufacturing sector continues to struggle.

January 22, 2020 – Equity markets continue to hit all time highs, inflation remains tame, consumer confidence remains at elevated levels, and job gains remain solid. For most of the U.S. economy, times are good. However, the manufacturing sector continues to struggle. The ISM Manufacturing Index slid to 47.2 in December—the fifth straight month of contraction and the lowest reading since June 2009 (bottom right graph). The ISM Index provides a very good sense of how real output in the sector performed in the month and suggests, even with a trade truce with China, that lingering issues remain for the sector. For certain manufacturing pockets around the nation, it might feel more like the worst of times.

This month we have upwardly revised our outlook for Q4 GDP growth to 2.2 percent as net exports are now expected to add to growth for the quarter, while the pace of inventory building is expected to be less of a drag than we thought last month. First quarter GDP growth is now likely to be softer than expected as ongoing issues with Boeing’s 737 Max weigh on the pace of inventory building. At the same time, net exports once again are expected to begin pulling down GDP growth, with imports growing faster than exports. 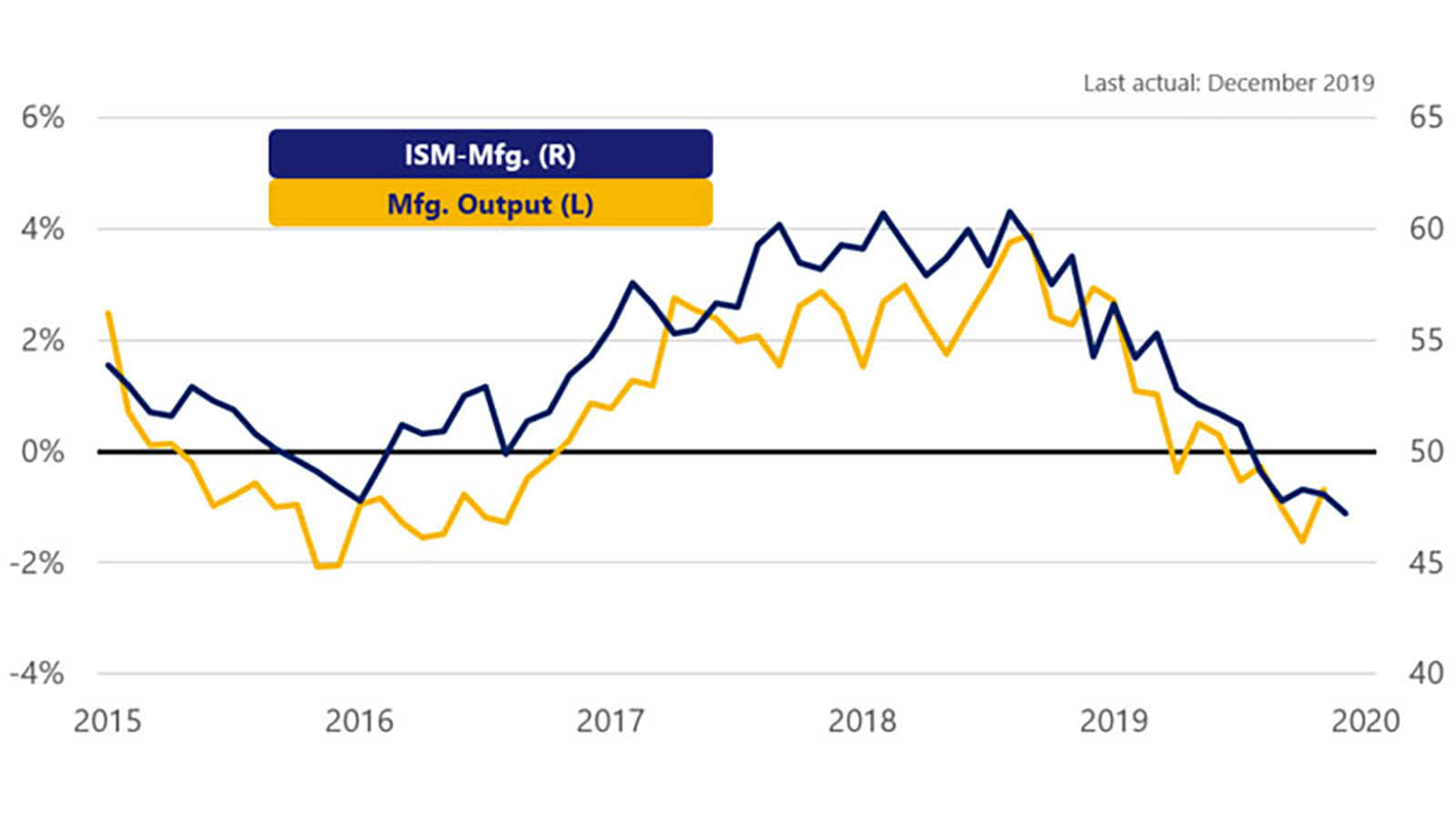 Core demand expected to hold up in 2020

The residual effects of trade tensions with China, along with Boeing’s stopped 737 Max production, continue to create swings in headline GDP growth due to trade and inventory swings. Core GDP growth (how consumers, businesses and governments are spending) is expected to remain roughly on par with last year’s growth rate at 2.4 percent. Real consumer spending is expected to only downshift slightly from an estimated 2.6 percent in 2019 to 2.5 percent this year. Nominal consumer spending growth, however, is expected to increase as higher inflation readings begin to materialize later this year. Outside of consumer spending, business investment will likely slowly rebound this year as trade tensions thaw further and global growth begins to rebound. Residential investment is also expected to add to growth this year as income growth and lower mortgage rates help to spur greater housing construction and sales activity.

A boring year for interest rates

The Fed is likely to remain on hold throughout our forecast horizon (the end of 2021). With GDP growth around its long-run potential growth rate of 2 percent and inflation gradually returning to the Fed’s 2 percent target this year, we see little reason for the Fed to change the stance of monetary policy.

Our forecast for the 10-year U.S. Treasury note shows little upward movement throughout the year. Modest long-term borrowing costs should also help to support the recovery in both business and residential investment.

Key risks to the outlook

Our global team of economists expect GDP growth around the world to be a bit stronger this year relative to last year. That said, the U.S. administration is considering new tariffs on French products in response to a new digital tax imposed on technology companies. Should the U.S. follow through on the tariffs, the European Union would likely follow suit with additional tariffs on U.S. goods, thus sparking global trade tensions once again. Trade tensions have the potential to slow global GDP growth again.

Late business cycle behavior poses another key risk to our outlook this year. With more modest economic growth expected this year and labor costs rising (employment cost index readings have notched higher), firms may finally face some pressure to reduce hours worked and/or begin to shed workers. As of Q3 (the most recent data), after tax corporate profit growth contracted 2 percent—the second quarter in a row of negative readings. In the months ahead, we will closely monitor the jobless claims data and average hours worked figures from the monthly employment report for any such signs of late business cycle behavior. 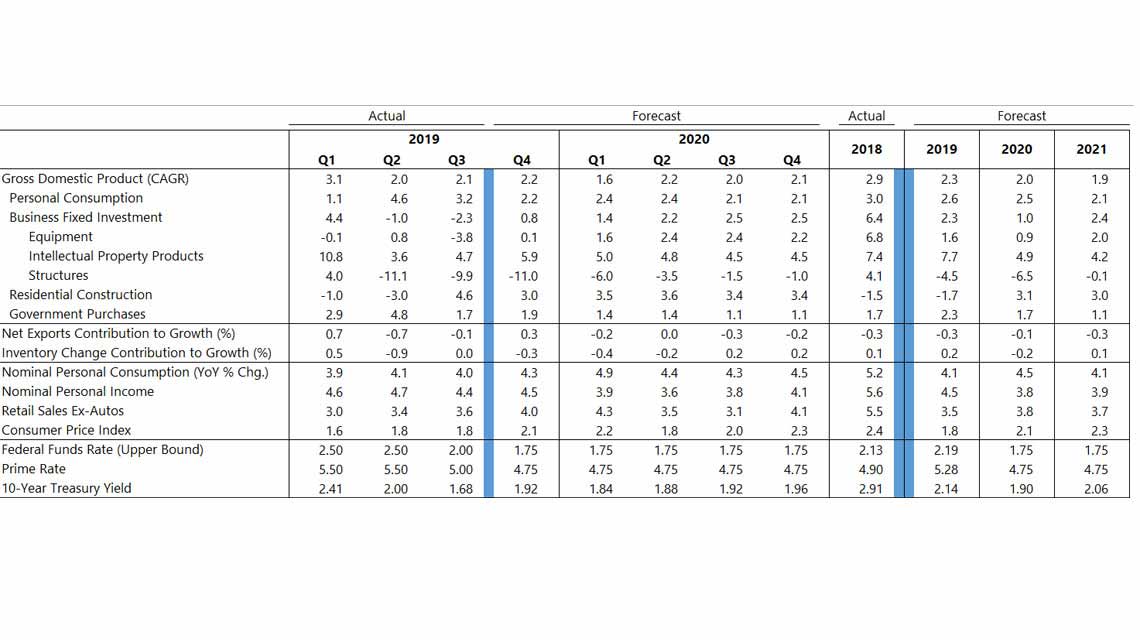 The rows in the table cover the subcategories of data that are included in the GDP—from personal consumption and business fixed investments, to government purchases. Additional economic indicators are provided, such as retail sales excluding autos, nominal personal consumption and the Consumer Price Index. The forecast was created on January 16, 2020.