Stock and home values have increased household wealth and supercharged consumer spending: this ‘wealth effect’ is critical to the continued economic expansion.

A co-authored whitepaper with Moody’s Analytics and Equifax

Consumers are powering the U.S. economy’s growth. Businesses, housing, government and global trade are all modestly contributing to growth, but it is the consumer who is key to the economy’s performance. Consumers are not spending with the abandon they did in the boom and bubble prior to the Great Recession, but they are stalwart in their spending.

Benefiting consumers are strong economic tailwinds. The job market is healthy, creating lots of jobs across all pay scales in most regions of the country. With unemployment at near 4%, the economy is at full employment. Wage growth has been somewhat disappointing, but it is slowly picking up, and because of low inflation, real wage growth—nominal wage growth less inflation—is improving. Household leverage is low and credit is increasingly ample and cheap. Gasoline prices are off their recent bottom, but they remain low by most historical standards. 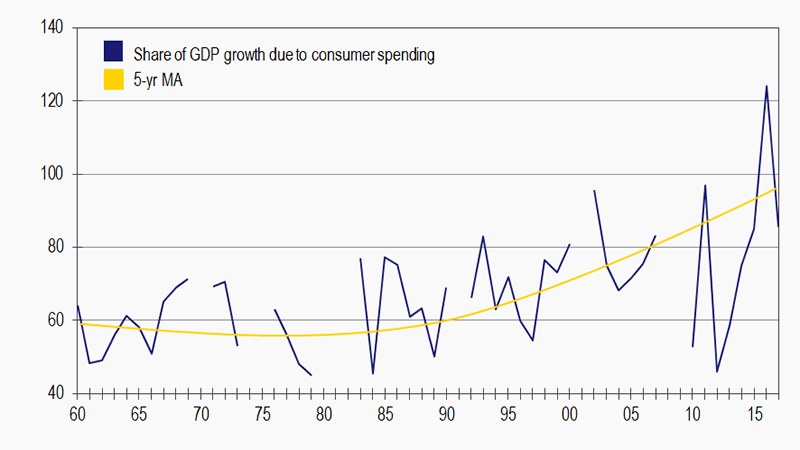 Another critical tailwind to consumer spending has been rapidly rising asset prices—most important, stock and house values. Stock prices are up a robust 20% over the past 18 months, despite the recent market correction, and 300% since their nadir during the recession. House price gains have also been impressive, rising a robust nearly 10% to new highs over the past 18 months, and 40% since their nadir five years ago. The resulting increase in household wealth has supercharged consumer spending via the so-called wealth effect—the impact on consumer spending of changes in household wealth.

The importance of the wealth effect has significant implications for the economic expansion. With stock prices now seemingly richly valued and house prices fairly valued, further outsize gains in asset prices appear less likely. If consumers are to continue spending as strongly as they have been, stronger wage gains will be needed. Moreover, the real possibility of a correction in the stock market, particularly as the Federal Reserve normalizes monetary policy, poses a meaningful threat to consumers and the broader economy.