From the Desk of the Chief Economist

January 22, 2018 - While 2017 may be remembered for a wave of populism and other political hot potatoes that sent fear, uncertainty and doubt (FUD) throughout the world, developments on the economic front looked more promising. The global economy not only recovered from the slump of the previous two years, but also saw the most broad-based growth since the global financial crisis. This may work to the benefit of the tepid U.S. economy, which has consistently lagged behind global growth for nearly a decade. A strong global economy can increase cross-border demand for U.S. products and improve job opportunities for U.S. workers. Technological innovations—especially healthy growth in the sharing economy and global online shopping experiences in 2017, for example, also demonstrated the world is a lot smaller than critics of globalization might want to believe, with November emerging as a key month for on-line shopping around the world.

Last year, economic growth became potentially self-sustaining over nearly all 200 economies expanding in 2017. This is the first time in a decade that growth has been spread so broadly1.

Globalization has played a big role in this trend. Its spread from a handful of markets in Europe, Canada and the U.S., to many more throughout Asia, Latin America, Africa and the Middle East over the past decade has led to a significant convergence of living standards. In the 1970s, merchandise exports and imports only represented 20 percent of total world output; today that number exceeds 50 percent2.

The British vote in 2016 to leave the European Union sparked fear of a resurgence in anti-EU sentiment. Instead of fracturing, the European political system has come together more strongly and the European economy got its groove back after a brief setback—growing well above potential last year. While full employment is still a way off, it now seems very achievable. The European economy is in a self-reinforcing virtuous cycle for the first time since the financial crisis, and consumer spending is expected to generate nearly half of overall economic growth this year in the EU3.

As 2018 gets underway, global politics may still be in flux, but the economy rests on firmer foundations than it has in over a decade. Amid these changes, one thing appears certain: consumer acceptance of new technologies is having a growing impact around the world.

Global consumer on-line spending in November is a good example. In the 20th century, peak holiday spending days were centered around the day after Thanksgiving in the United States (Black Friday), and running into the days before Christmas. New key shopping days soon joined Black Friday in the 21st century. First came "Cyber Monday," which was marketed and promoted by the U.S. National Retail Federation. Then came Singles’ Day, which first emerged at Nanjing University when four single male students got together to celebrate being single. What had been a localized, collegiate activity became a global shopping phenomenon when Alibaba, one of China’s dominant internet shopping portals, launched its first Singles’ Day online sale in 2009.

VisaNet data helps to illustrate how important these three holidays have become around the world, especially for online spending as a share of total spending. Today, Black Friday is a major online shopping day in more than 40 countries around the world. In these countries, 43 percent more Visa-branded cards were used than in an ordinary November day. On Cyber Monday, 12 countries reported a spike in spending, with 33 percent more cards used online. By comparison, 37 countries reported a spike in spending on Singles’ Day, with an 83 percent increase in cards used online. Singles Day has quickly emerged as one of the leading trifecta of global holiday shopping days of the year.

The sharing economy is another example. Strong growth in sharing economy sectors, such as crowd funding/lending, peer-to-peer lodging and car sharing, has surpassed the growth of traditional rental sectors (e.g. book and car rentals, bed and breakfasts, hostels) and is expected to grow to $335 bil. by 2025, more than 20 times its current size4.

Emerging markets were latecomers to the sharing economy, but adoption in these has already leapfrogged the advanced economies, with ground-breaking advances such as the delivery of health care services by drone and solar-powered mobile phone charging in remote areas of Africa, among others. 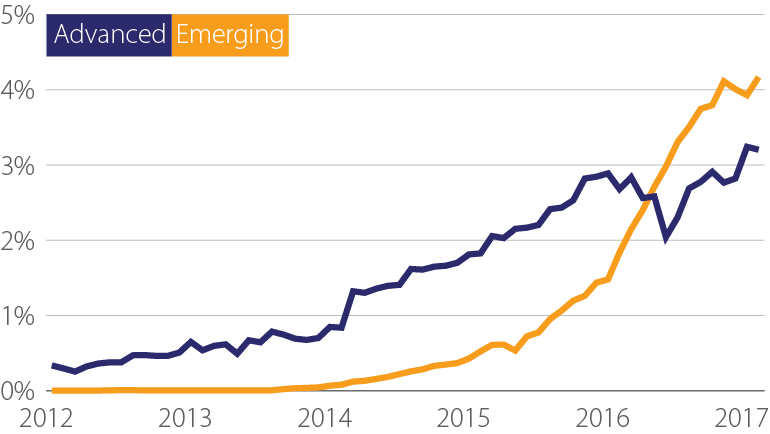 So what lies ahead in 2018? The jury is still out on the populist movement. In the short term, economic policies that favor national interests over global ones could be expected. More restrictions on the global flow of information and goods may be inevitable. However, how far can protectionism go? In the rapidly advancing world of technological innovation, digital consumers’ national borders may prove to be illusory barriers to the spread of global trends.

Global economic growth should stay strong in the coming year, and could increase to 3 percent GDP in 2018 from 2.9 percent last year5. The global economy has proved again and again its resilience to FUD and fearmongering as the will of the consumer continues to prevail.

Wayne Best leads Visa’s Business and Economic Insight team. As chief economist, he keeps close watch on emerging opportunities in the trillion-dollar payments industry. An active participant in the World Economic Forum’s Future of Consumption community, he identifies economic trends shaping the future. Best’s presentations and reports explain the impact of these trends to company and client executives, as well as government leaders around the globe. Before joining Visa in 1990, Best worked as a consultant performing cost benefit analyses for the power industry. In addition to an MBA, Best holds a degree in nuclear engineering and has participated in the Stanford University and Kellogg School of Management executive programs.

Case studies, statistics, research and recommendations are provided "AS IS" and intended for informational purposes only and should not be relied upon for operational, marketing, legal, technical, tax, financial or other advice. You should consult with your legal counsel to determine what laws and regulations may apply to your circumstances. The actual costs, savings and benefits of any recommendations or programs may vary based upon your specific business needs and program requirements. By their nature, recommendations are not guarantees of future performance or results and are subject to risks, uncertainties and assumptions that are difficult to predict or quantify. Visa is not responsible for your use of the information contained herein (including errors, omissions, inaccuracy or non-timeliness of any kind) or any assumptions or conclusions you might draw from its use. Visa makes no warranty, express or implied, and explicitly disclaims the warranties of merchantability and fitness for a particular purpose, any warranty of non-infringement of any third party's intellectual property rights. To the extent permitted by applicable law, Visa shall not be liable to a client or any third party for any damages under any theory of law, including, without limitation, any special, consequential, incidental or punitive damages, nor any damages for loss of business profits, business interruption, loss of business information, or other monetary loss, even if advised of the possibility of such damages. All brand names and logos are the property of their respective owners, are used for identification purposes only.