Are the world’s top destinations at risk of overtourism? | Visa

Are the world’s top destinations at risk of overtourism?

September 5, 2019 – In 2018, the total number of cross-border tourist arrivals rose by 74 million¹ to reach a new high of 1.4 billion. Put into perspective, that growth represents an outbound travel market equivalent to nearly all outbound U.S. travel last year. It was the second year in a row for such an increase. While the number of people traveling abroad is increasing rapidly, where these globe trekkers are going is not. According to Visa data,² 94 of the top 100 most internationally-visited destinations in 2018 were also in the top 100 in each of the past four years. Familiar names such as Paris, Bangkok and Hong Kong were as likely to enjoy this distinction as were Marrakesh and Warsaw.  In each of the past four years, these top 100 places consistently accounted for two-thirds of all international travel.

Is this surging demand causing “overtourism” in the most popular global destinations? One of the top-trending buzz terms in the travel industry this year, overtourism essentially describes destinations that are stretched beyond their ability to host the current and growing volume of tourist arrivals. The strong growth in global tourism, especially in thinly-populated destinations, has played a role, as has the narrow set of places that world travelers visit. Most of the overtourism analysis consists of individual anecdotes, but with very little data to back them up. Visa’s international travel (VISIT) platform can provide context and insights on the impact of outbound travel trends on over 700 destinations around the world.

By combining VISIT’s arrival data with data on the size of the resident population, tourism intensity can be measured more systematically across the world. Tourism intensity, the number of tourists relative to the resident population of a destination, provides one measure of the impact of foreign travelers on destinations.³ One challenge for the industry is that the increase in tourism to destinations around the world is more acutely felt by less populated areas. Although small destinations (those with less than 500,000 full-time residents) accounted for only a quarter of the travel over the past two years, they faced the greatest impact as measured by the intensity of tourism. Unlike large cities, small towns may not have the same level of infrastructure to support large numbers of visitors, so the increase in tourism could lead to greater, more visible, congestion. 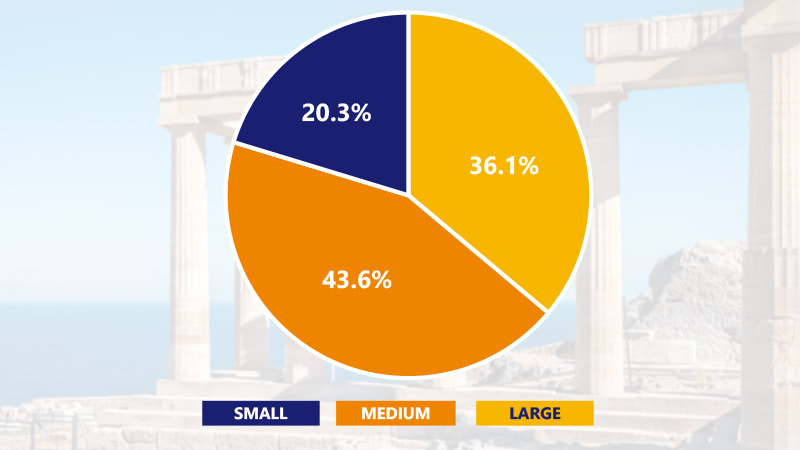 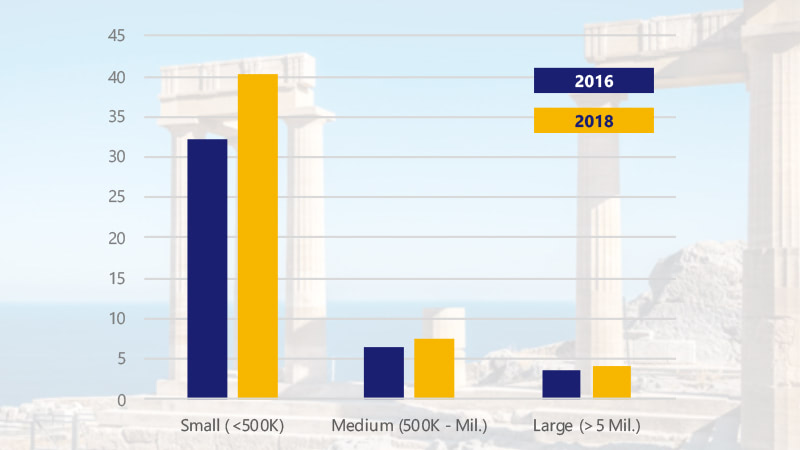 For places within the top 100, the increase in inbound travelers puts increased pressure on already heavily visited locations. The intensity of tourism for all locations is higher, but much more acute for less populated destinations. This concentration of tourism matters for the overall health of global tourism.  Overcrowding impacts not only the quality of life for residents, but can also influence the traveler’s experience.  A negative travel experience could reduce the likelihood of travelers returning to the same destination, or influence the travel decisions of other potential travelers who they might share it with. More importantly, as the quality of tourism experiences deteriorates, consumers’ perceptions of the value of traveling abroad could also change.

Cumulative distribution of international arrivals
(By destination ranking in 2018) 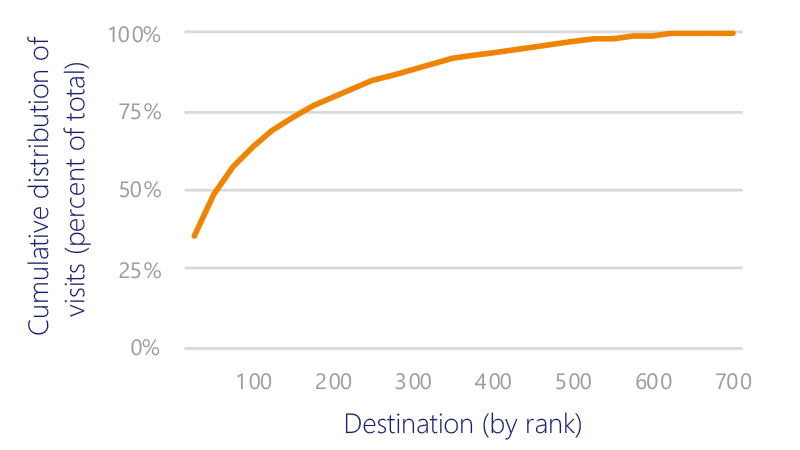 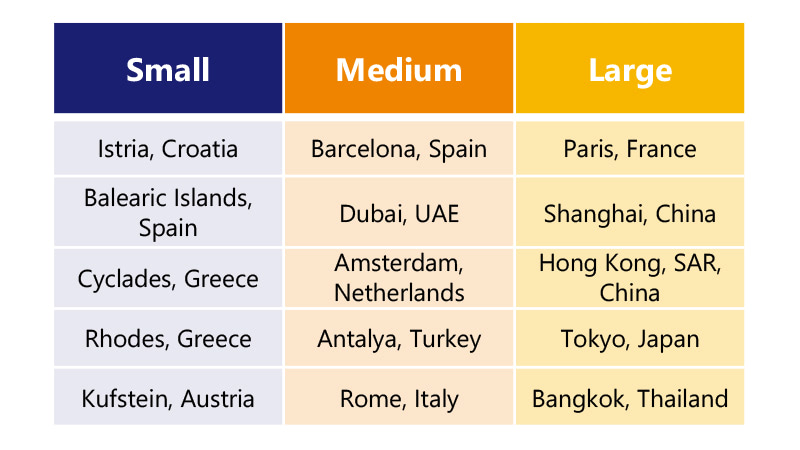 Table listing examples of destination within the top 100-most visited places based on resident population, ranging from small cities to large cities.

Table listing examples of destination within the top 100-most visited places based on resident population, ranging from small cities such as Istria, the Balearic Islands, Cyclades, Rhodes and Kufstein, medium sized destinations such as Barcelona, Dubai, Amsterdam, Antalya and Rome, to large cities like Paris, Shanghai, Hong Kong, Tokyo and Bangkok.

Many destinations faced with accommodating a tourist influx not only receive more visitors relative to the resident population, but also tourist inflows that are more concentrated during the peak travel season. In the top 100 cities, for example, the intensity of inbound tourism is on average 48 percent higher during their peak travel season than during the course of a year. This suggests that a more even distribution of arrivals during the year could potentially help lessen the impact of inbound tourism during peak seasons. Destinations like the Istrian Peninsula in Croatia—where tourists outnumber locals four to one during a peak season—could potentially cut that number in half if arrivals were spread more evenly throughout the year. This tourist-to-resident ratio would be on par with the overall average for the top 500 destination cities globally. 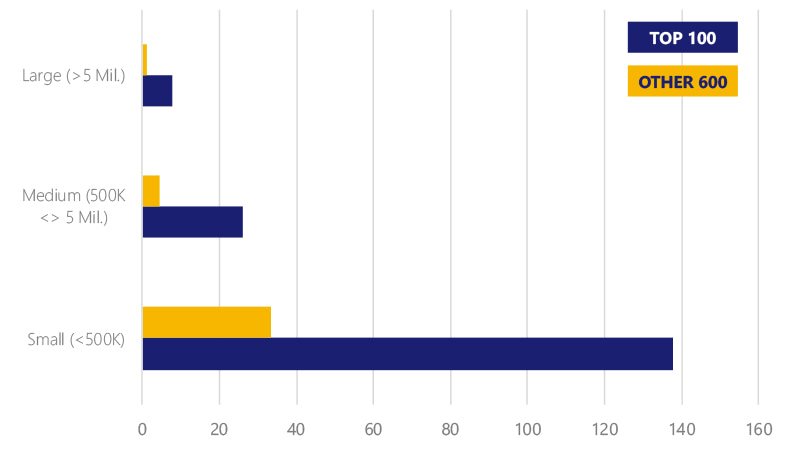 Bar chart showing monthly foreign arrivals of 138 visitors per 100 residents for small city destinations ranked in the top 100 and 33 visitors per 100 residents for the next 600 ranked small city destinations, compared with monthly foreign arrivals of 26 visitors and 5 visitors respectively for medium sized cities, and 8 visitors/1 visitor respectively for large cities.

Growth in demand vs tourism intensity 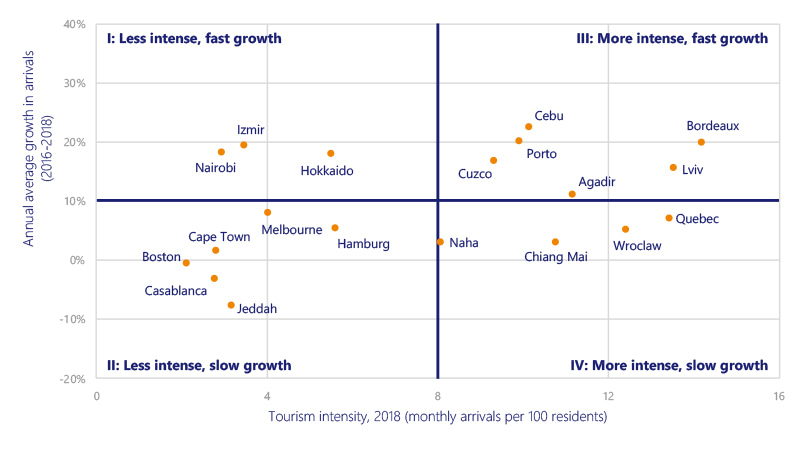 Proposals to address overtourism have focused primarily on how destinations can manage the inflows, rather than looking at the other side of the market, such as how the origin markets for tourists promote the destinations and how the travel routes are set. For medium-sized cities, strategies that take into account both sides of the market could be particularly useful relative to the other two groups of cities. That is because for less-populated places, shifting travel from the top 100 to lower ranked destinations will result in more crowding in already heavily visited areas. And for large cities, the impact of tourism is less intense. With better data, the development of new routes and marketing of travel destinations could take into greater account the sustainability of tourism flows to these mid-sized cities.

Consider, for example, medium-sized cities below the top 100 in terms of total arrivals in 2018. Using data from VISIT, the cities are segmented into four quadrants based on both how much the demand has grown over the past two years and the current intensity of travel to those cities. Cutoffs in this mapping correspond to the averages on both metrics for the top 100 medium-sized destinations.

The data helps to identify cities where growth is high and tourism is already intense, such as Porto (Portugal) or Cuzco (Peru) – chart above, Quadrant III – where planning today in tourism management could help to forestall some of the issues facing similar cities in the top 100 list. Cities where this is less of an issue now but could be worth considering include Quebec (Canada) and Chiang Mai (Thailand)—Quadrant IV. Opportunity areas such as Nairobi (Kenya) or Izmir (Turkey), show promise as emerging hotspots for travel, where the intensity of foreign visits remains manageable—Quadrant I. For destinations that could be put on the map even more for global tourism flows, look to Jeddah (Saudi Arabia), Melbourne (Australia) and other cities in Quadrant II.

Strategies to encourage greater destination diversity could harness the differences between outbound travel markets, especially the different dynamics between advanced versus emerging market economies. When it comes to getting travelers to diversify their destination choices, travelers from more advanced markets may be more open to such messages. Their top 100 destinations represented only 44 percent of their total travel in 2018, as opposed to 61 percent for emerging market travelers. This could also go a long way in addressing the near-term challenges of overtourism, as nearly two-thirds of the increase in and volume of international arrivals last year originated in the relatively wealthier, advanced economies of the world (including the U.S., Canada, Western Europe, Japan, Australia and New Zealand).  In the most intensely visited destinations in the world today, a visitor is more than twice as likely to be from an advanced market as an emerging market, with that probability rising for European destinations.

Taking advantage of when people choose to travel could be one way to alleviate the pressure on locations during peak travel seasons. The timing of when most people take their vacations in advanced markets, which occurs mainly between June and August, largely drives the current seasonality in global travel. This should change over time as travelers from emerging markets increasingly drive global travel growth. In 2018, arrivals from emerging markets rose 11 percent, compared to only 7 percent for advanced economies. Emerging market travelers tend to spread their travel out more evenly across the year, but their impact on most destinations has been more limited given how concentrated their travel destinations are currently.

So long as foreign vacations remain an aspirational luxury for many consumers around the world, the number of people taking to the ski slopes, boats, trains and roads will continue to rise. The three forces covered in Visa’s 2016 study, “Mapping the Future of Global Travel and Tourism”—including a rising global traveling class, global aging and increasing connectivity— should continue to power the growth in outbound tourism in coming years. With an estimated 1.8 billion international trips expected to be taken each year over the next 10 years, according to Visa’s study, big data can help to ensure the long-term sustainability and viability of cross-border travel, both by identifying emerging hotspots for global travel and measuring the impact of current and potential growth on destinations.

³ While a full accounting of the impact of tourism on a destination would consider both domestic and foreign arrivals, given the limited availability of domestic travel statistics, this report focuses only on the foreign component